Throw the keys to the buyer, grab a check and hit the exit. That’s the expectation of many owners selling their businesses. But it’s also an increasingly rare scenario.

More sellers are being asked to help finance sales of businesses for buyers, so that sellers are paid in installments over time.

Many buyers these days also want or require sellers to continue to work at the firms, post-sale, so that  buyers can more easily take over the managerial role without disrupting employee or customer relationships.

These trends are a sometimes unpleasant surprise for owners who hoped  that sales of their business would enable a complete retirement. 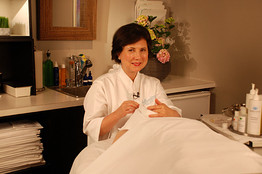 Kathryn MyersNina Howard, in May 2011, demonstrates face massage techniques to a class at Bellanina Institute, the training facility located in her Ann Arbor spa.

One report released last month suggests that many owners count on an eventual sale of their firms to fund their golden years. More than half of 1,255 business owners surveyed by the American College in Bryn Mawr, Pa., said they were concerned about getting the highest possible value for their businesses to help fund their retirements, according to the report.

The rise in seller financing is due in part to the fact that some buyers still aren’t able to secure sufficient third-party funding. It also reflects lingering concerns among buyers about business debt, or declining or flat business returns.

As many as 90% of the 2011 transactions at Generational Equity LLC, a business brokerage in Dallas, had a seller-financing arrangement, says Terry Mackin, managing director. That compares to 25% of the transactions handled by that firm before the recession, for example. Last year, the firm handled more than 40 deals nationwide, mostly in the $3 million to $5 million range. 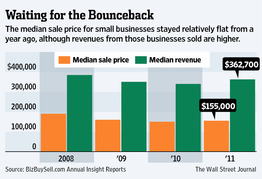 Sellers of all ages often need to finance as much as 50% to 80% of the sale if bank financing is unavailable, says Joseph L. Caffrey, president and CEO of Worldwide Business Brokers LLC, a brokerage based in Virginia Beach, Va., with eight locations on the East Coast. Mr. Caffrey’s firm handled roughly 50 transactions last year, generally in the $2 million to $5 million range. He says that when a business has collateral, such as real estate, banks are more willing to lend to the buyer, but the seller will often still need to finance 20% or more.

Nina Howard of Ann Arbor, Mich., who sold her spa last year, thinks she could have gotten about $1 million for her spa in 2007. But she wasn’t ready to retire then.

Sales, then about $1.5 million, were hurt by a weak economy and had dropped more than 30% by 2010. A buyer who surfaced last year didn’t like the fact that the spa had some leftover debt from an expansion Ms. Howard undertook years ago, she says.

So Ms. Howard agreed to accept a value that was “significantly less,” she says, and to hold a 50% ownership of the business, post-sale, to keep the debt in Ms. Howard’s name. As part of an “earn-out” agreement, she now is required to work alongside the spa’s new owner for another four years, as its chief creative officer, at which point the debt should be paid off.

She had hoped to no longer work at all after the age of 60. Now 59, “I don’t have as much energy,” she says. Like many owners, she had little other savings because she had reinvested everything into Bellanina, the 17-employee day spa and massage school she started 1996.

Jeff Berkow in December sold Power Pallets, the Las Vegas wood-pallet  manufacturing firm he founded seven years ago. The 66-year-old covered 15% of the sale, agreeing to take payments in installments over five years.

He declines to say how much he got for the company. But he says he chose to stay connected to the company by becoming a lumber broker. This, he says, makes him more comfortable about getting paid the 15%.  “My preference would have absolutely been to get 100% cash up front,” he says.